Connection between TPP I (CET I) and II (CET II) 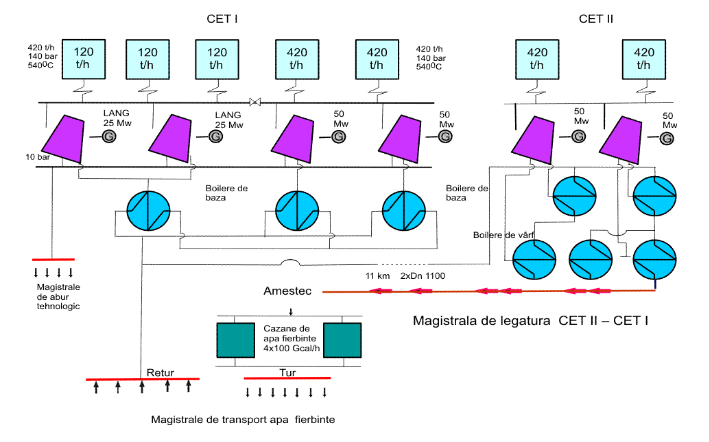 CET Iasi I is a natural gas-fired cogeneration plant which had in 2010:

In August 2013, the plant had 2 Large Combustion Installation (LCIs) in operation, i.e.: installations with Pt > 50 MW:

RELEVANT INFO: After having been declared insolvent, parts of CET I Iasi installations were sold as scrap iron to SC Shine Concept SRL, an obscure firm, at the time, from Galati, but now headquartered in Bucharest. Two months after the tender, Iasi municipality cried foul and accused major irregularities with the auction, since the 8,600 tons of material sold at the auction included functioning installations (which were disputed in court) including 3 turbines from CET I, 2 steam boilers, 2 hot water boilers, pipes, transformers, engines, etc. Iasi municipality and Dalkia contested in court the illegal sale of the TTP’s assets, but the judges rejected the complaint and ruled that the tender was correct. It is our understanding that there are still some possibilities to attack in court this decision that have not been exhausted (July & Nov. 2013 level).

The contracts for CET I Iasi covered:

Production Capacities: This power plant has:

During the cold season (October-April), the TPP is operational non-stop (3 shifts of 8 hours each). During summer, the TPP is not-operational.

CET Iasi II is mainly hard-coal-fired (fuel-oil is used only to turn it on and off). The ignition mini heat plant uses fuel-oil or natural gas though the interconnection with CET I.

Integrated Environment Authorization: At the end of 2013, CET II Iasi (Holboca)’s authorization expired and had to be renewed. Despite the fact that the appropriate investments have not been finalized yet, in December 2014, the Iasi branch of the National Environmental Protection Agency (ANPM) decided to exempt CET II Holboca and allow it to continue operating until modernizations currently under way are completed. The project “Rehabilitation of district heating in Iasi in order to comply with air emissions standards and to increase energy efficiency in district heat supply” mentioned earlier includes also modernization works at CET Iasi II (Holboca).

DeSOx: investment in progressThe contract to build a DeSOx installation was awarded to a consortium made up of SC Elsaco Electronic SRL and SC TMUCB SA and signed on 31.07.2014. Total contract value: 119,040 million lei (VAT included) of which 50% is covered by EU funds, 45% by Romanian Government, and 5% by Iasi municipality. The start of construction was significantly delayed because the result of the tender was contested more than 10 times. The problem was finally settled in summer 2014. It is worth noting that one of partners in the consortium (TMUCB) filed for insolvency this year and that the awarding decision was maintained in favor of the Elsaco – TMUCB association despite being formally contested by other participants such as the association between ALSTOM POWER SWEDEN AB – SC ALSTOM INFRASTRUCTURE ROMANIA SRL – SC ROMELECTRO SA for instance in late June 2014. Construction period: 32 months, and it must be completed by end of 2015, so the constructor is racing against time.

DeNOx: investment in progress at one of the steam boilers of 420t/h, CET Iasi II

Contract was signed with the consortium of FORTUM POWER, HEAT OY Finland and ENERGOMONTAJ SA BUCURESTI on 12.05.2014. Order to start work was issued on 19.05.2014.

Investment: design and execution of a dry slag and ash collection system at CET Iasi II.

Other modernization work conducted within the EU-funded project “Rehabilitation of district heating in Iasi” includes: