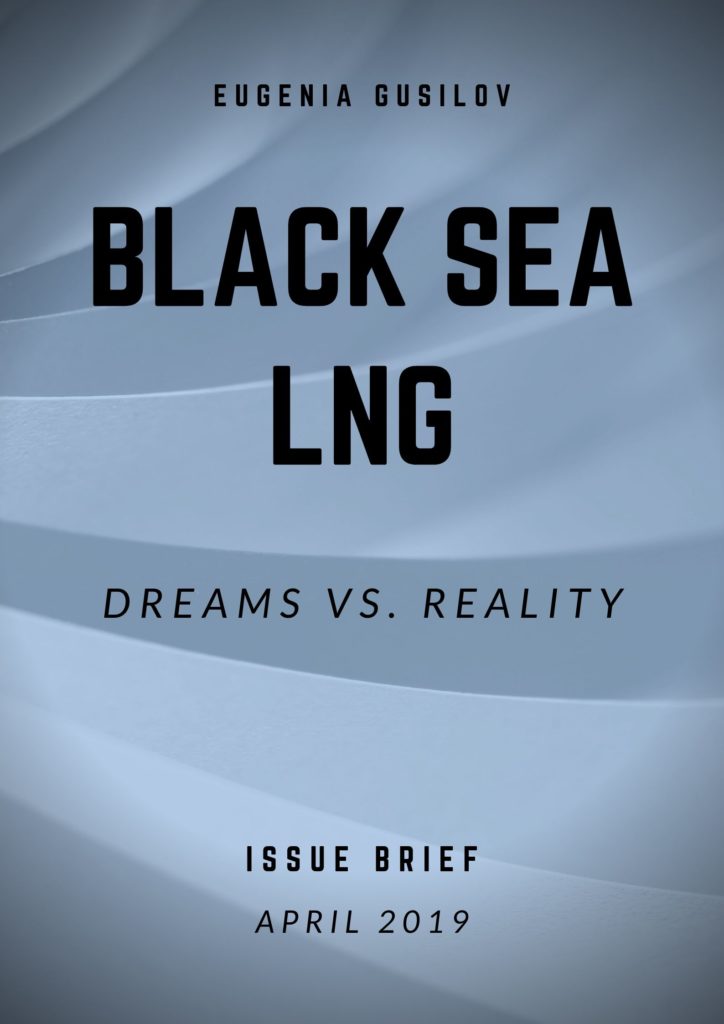 Europe has 28 large scale LNG terminals, all of which are import terminals (regasification). Only Russia and Norway have export terminals (liquefaction). Only twelve countries in Europe have import LNG terminals: Belgium, France, Greece, Italy, Lithuania, Malta, the Netherlands, Poland, Portugal, Spain, Turkey and the UK. Of these 28 large scale terminals, 24 are located in EU countries and 4 are in Turkey. Moreover, of these 28 LNG terminals, 23 are land based, 4 are floating storage and regasification units (FSRUs) and one (in Malta) has both a Floating Storage Unit (FSU) and onshore regasification facilities.[1] There is a substantial imbalance in the way these LNG terminals are distributed in Europe, in favor of Western Europe. Thus, the biggest regasification capacity belongs to Spain (61.9 Bcm/year in 6 operational terminals), followed by the UK (42.7 Bcm in 3 operational terminals), and France (34.65 Bcm/year in 4 terminals). In South East Europe (SEE) we have only an operational Greek LNG terminal at Revithoussa, and two planned: one at Alexandroupolis (In Greece) and another at Krk (in Croatia).

In North Eastern Europe, Lithuania opened its LNG terminal (Klaipeda) in 2014 and Poland inaugurated Swinoujscie LNG in 2016. Estonia (who currently has no LNG terminal) plans to build two: Padalski LNG (2.5 Bcm) and Muuga/Tallinn LNG (4 Bcm). Latvia too plans to build an import LNG terminal – Riga LNG (5 Bcm) and so does Russia (Kaliningrad LNG).

At the far Eastern end of Europe, in the Black Sea, we have no LNG terminals at all. Turkey (a Black Sea country) has 4 LNG terminals (2 onshore, 2 FSRUs), but none of them are located in the Black Sea. The closest – Marmara Ereglisi is located in the Marmara Sea – which connects the Black Sea with the Aegean Sea. Back in 2010, Romania dreamed to build the first LNG project in the Black Sea at Constanta, but the plan has yet to see the light of day. The AGRI LNG project is considered by ENTSO-G as “delayed” and its maturity “less advanced”, with a potential date for construction start in 2022 and commissioning in 2026 (optimistic scenario). Ukraine too has announced back in 2011 that it wants to build a 10 Bcm LNG terminal in Odessa (5 Bcm in stage 1, and an additional 5 Bcm in stage 2), but those plans were completely derailed by subsequent developments in Ukraine starting with 2014 and by Turkey’s opposition to an increased traffic through the already congested Strait of Bosphorus. Both LNG terminal projects (Odessa and Constanta) were therefore looking at Azerbaijan as a potential source of gas. 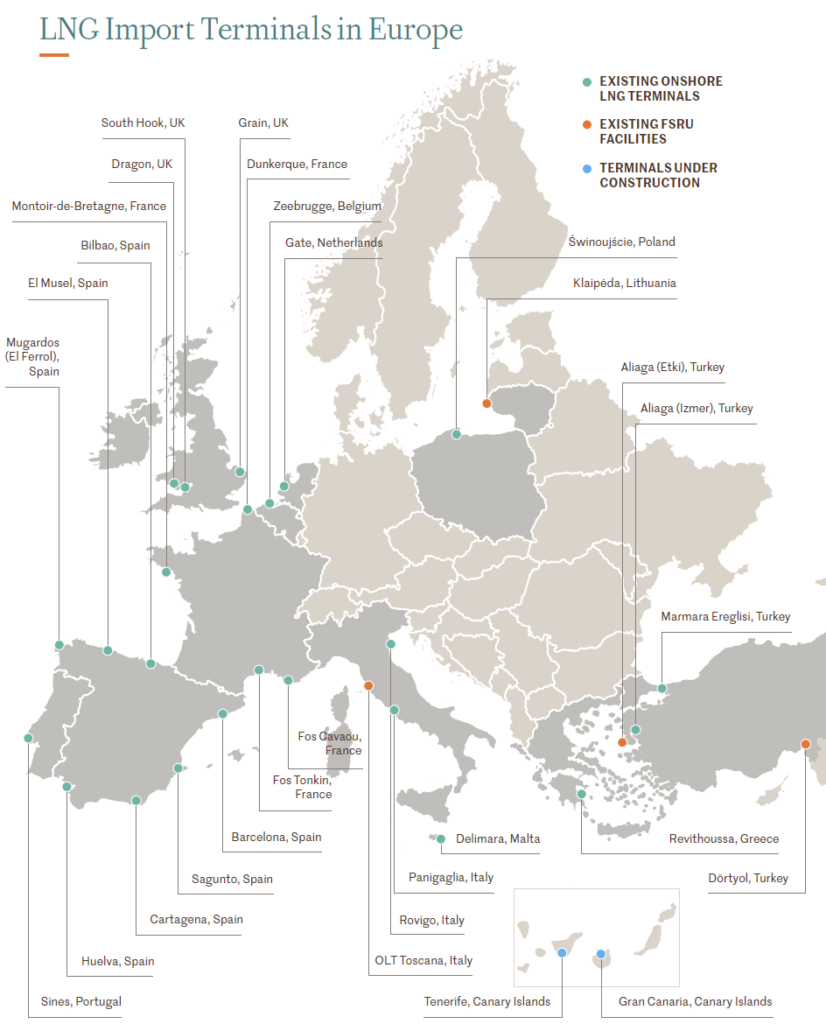 The low utilization rates of the existing LNG terminals is another issue worth taking into account. Europe’s existing LNG capacity is underutilized. Of the total European LNG import capacity (200 Bcm) only a quarter (50 Bcm) was utilized in 2014. A follow-up study conducted for the European Commission in 2017 re-confirmed the “low utilization rate of LNG terminals (0-36% in 2016)” with LNG having a “significant role in the Northern route (provides cca. 18% of missing volumes)” and helping “mitigate the risk of African pipeline route disruption (38% of missing volumes)”, but with a “limited contribution in SEE Europe”.[2] EU’s LNG Strategy presented in 2016 called for a more efficient use of existing LNG infrastructure and gas storage, before building new regasification terminals. Nevertheless, the EU has co-financed or committed to co-finance new LNG infrastructure projects worth over €638 million for 14 LNG projects, which will increase capacity by another 15 Bcm by 2021, in addition to the 150 Bcm of spare capacity that currently exists.[3] However, all these 14 projects are located mostly in the Baltic, Mediterranean and Adriatic Seas, with not even one in the Black Sea.

Azerbaijan-Georgia-Romania Interconnector (AGRI) was supposed to build the first LNG project in the Black Sea and diversify gas supply by creating an alternative route for Azeri gas to Europe. First proposed in 2010, it would have transported Azeri natural gas by pipeline from Azerbaijan to the Georgian port of Kulevi (in Georgia) – and from there (as LNG) –across the Black Sea to the port of Constanta (in Romania), where it would be regasified and shipped via the Romanian gas transport system to European markets (via Hungary). British consulting company Penspen completed the feasibility study for the project back in 2014 and provided 3 scenarios to consider for AGRI LNG development: 2 Bcm (at a cost of € 1.2 Billion), 5 Bcm (€ 2.8 Billion), and 8 Bcm (€ 4.5 Billion).

The first edition of the EU’s Project of Common Interest (PCI) list in 2013 included the Romanian project in section 6.22 – AGRI (with the LNG terminal in Constanta as subproject 6.22.2), but also in the Priority Corridor Southern Gas Corridor (7.2) with minimum 8 Bcm/year from the Caspian (Azerbaijan or Turkmenistan), not with LNG, but the “submarine solution” – a pipeline linking Georgia and Romania (White Stream).[4] If the AGRI project could be found on the first Project of Common Interest in 2013, it was nowhere to be found on the latest – 3rd PCI list (November 2017).[5] In fact, it has already vanished from the second PCI list (November 2015), where both projects (6.22 – AGRI LNG solution and 7.2 – AGRI submarine pipeline solution) appeared as “No longer considered a PCI”.[6] This could mean any of the following reasons:

Since construction did not start and the project was eligible before, a possible reason is that either it was not re-submitted (promoter lost interest in it) or it was ranked lower than other projects (not considered commercially viable). The fact that it has not re-surfaced on the 3rd PCI list (in either form – LNG or submarine pipeline) confirms the lack of commercial attractiveness or signal difficulties related to transport across the Black Sea. These challenges can relate to the liquefaction part. As rightfully observed by British energy security expert John Roberts, countries that possess gas resources (in this case, Azerbaijan) never build LNG terminals in other countries (in this case, Georgia).[7] The challenge has to do also with the deteriorating geopolitical climate in the Black Sea after 2014. In either case, it adds an extra layer of complexity to the AGRI LNG project. Friendship among countries (Azerbaijan, Georgia and Romania) is not enough to make a gas infrastructure project a reality. A commercial project has to be underpinned by sales contracts. And, in AGRI’s case we have seen only political statements, Memorandum of Understanding, feasibility studies and discussions among the SPV shareholders. No sales contracts. Without a firm buy commitment, who will put money in building the infrastructure? Especially, when LNG remains more expensive than pipeline gas, especially in an oversupplied European gas market, and especially in a place where the geopolitical climate has worsened. Since the annexation of Crimea by Russia in 2014, the geopolitical risk in the Black Sea went up. Such a project could face harassment/sabotage from Russia, especially since the LNG ships/underwater pipeline would have to pass by Ukrainian waters that are controlled by Russia. This could further strain already tense relations between Black Sea countries. In the post-2014 climate, such a project carries a higher geopolitical risk, making the securing of finances and related insurance costs more expensive than in a business as usual case.

Add to this, Romania’s drive to develop its own Black Sea resources which undermines the urgency of an LNG project. To put things in context, the talks related to the AGRI LNG project started in 2010 (2 years before the discovery of the Neptune gas field in Romania’s offshore waters) which changed the optics and calculations in Bucharest. Since 2012, the priority in Romania has been the development of its Black Sea gas and related gas infrastructure (to bring this gas onshore, to export it to Moldova or further on to Austria). Romania is not particularly great at promoting several projects simultaneously. Also, it has learned that being on a PCI list is not in itself a guarantee of success, since the project promoters have to be very active in lobbying for the project, securing finance, conclude pre-sales contracts, etc.

Moreover, Romania’s haphazard policy making in the past 2 years raises a big question mark even regarding its Black Sea gas developments with only one company (Black Sea Oil and Gas) taking a FID in early 2019 meanwhile the two other big players (OMV Petrom and Exxon) adopted a “wait and see” strategy.

Finally, it is clear that Azerbaijan’s priority investment destination is Turkey, not Romania. Azerbaijan does have the resource base to supply the Constanta LNG project, but in the near future its number one priority is gas supply through the TANAP/TAP system. Should its capacity be expanded (from the current 16 Bcm to 32 Bcm in stage two), this would allow Azerbaijan to sell more gas to Europe (20 Bcm instead of the current 10 Bcm via TAP) than the volume it would sell across the Black Sea as LNG to Romania (8 Bcm).

Romania’s efforts in early 2019 to explore new cooperation possibilities with Azerbaijan by involving SOCAR in Romania’s Black Sea gas developments (through a partnership with Romgaz) signals the attempt to secure Caspian gas for transport through the Eastring pipeline – a project which, although equally distant in time (2023-2028), seems to have better prospects than AGRI LNG does at the moment. Add to this the fact that there will be four elections held in Romania in the next two years: European parliamentary and Romanian presidential elections this year, Romanian local and parliamentary elections in 2020. In effect, judging by how fast Romania has been moving on its priority projects so far (Black Sea gas development, BRUA, interconnectors), and for all the reasons explained above, I am very skeptical about the chances of Constanta LNG project happening anytime soon.

NOTE: The brief was published in the Central Europe Energy Partners (CEEP) Report  No.1/2019