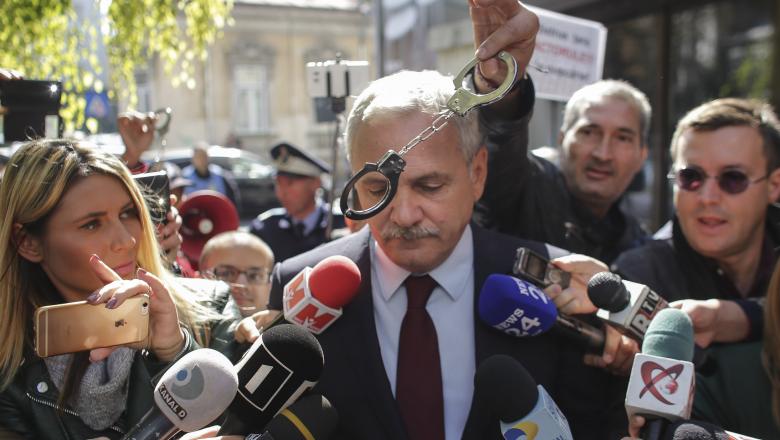 The long death of PSD’s coalition

At the end of 2016 the idea that the social-democrat-led government would lose its majority in parliament was absurd. Then, the Romanian Social Democratic Party (PSD) and their junior coalition partner, ALDE, won a clear majority in the country’s parliamentary elections. The opposition was weak, leaderless and lacked unity. PSD hoped that its leader, Liviu Dragnea, would become prime-minister. However, Liviu Dragnea was convicted earlier in 2016 for election fraud and the law forbids a convicted criminal to become prime-minister. The Supreme Court gave him a two year suspended sentence for his role in the 2012 impeachment referendum. Klaus Iohannis, Romania’s liberal president, made sure that Liviu Dragnea would not become prime minister and administer the country.

From January 2017 until May 27, 2019, Liviu Dragnea sought to control Romania’s government through proxy prime-ministers, mostly unknown figures, loyal to him only and dependent on his approval for every decision they make. Their main mission was to ensure that Mr. Dragnea’s conviction was either quashed in courts based on technicalities or that he receives a pardon and amnesty. The latter was better politically because it could mark the “zero hour” of Romania’s anti-corruption drive and could have been used as a reconciliation tool.

In Romania, the president can grant clemency to individuals in the form of a pardon, while the parliament can grant both pardons and amnesty en masse. Through the medium of the emergency decree, the cabinet can also deploy the power of clemency. It was this final objective that Mr. Dragnea was after, an emergency decree providing him with a clean rap sheet, so president Iohannis could not have objected against him becoming prime-minister.

The need for an emergency decree to grant a general amnesty and pardon was necessary in order to avoid, on one hand, the protests of the opposition, as well as delaying actions in Parliament and, on the other hand, to ensure the loyalty of the party. Many social democrats have been convicted over the past decade for corruption, graft and abuse of office and, if Mr. Dragnea pardoned only himself, he would have endangered his position as party leader. Furthermore, because he was being investigated and indicted for corruption offenses in other cases that were slowly making their way up the justice system, Mr. Dragnea needed to dismantle as much as possible the existing anti-corruption framework.

In order to achieve his objectives Mr. Dragnea employed a two-prong strategy against the Romanian judiciary, his main obstacle to gaining power – or so he thought. The first part of the strategy was not very complex and was all too predictable – it involved buying off major portions of the electorate with paycheck increases, while at the same time trying to silence the critics by portraying them as part of a foreign cabal whose aim is to keep Romania down. Inspired by the successes of Hungary’s Viktor Orban, Mr. Dragnea used nationalism and conspiracy theories to delegitimize the opposition.

The second prong of the strategy was an all assault on the judiciary, the anti-corruption institutions and the people who were leading them. This assault consisted in changes to the Penal Code that have made the work of the prosecutors harder, amendments to the laws governing the organization and functioning of the judiciary, and the replacement of key prosecutors such as Laura Codruța Kovesi – the chief prosecutor of the Anti-Corruption Department and Augustin Lazăr – Romania’s Attorney General. A new prosecutorial department was created to investigate “crimes” of the judiciary – the SIIJ, but popularly known as the “Special Section”, or the “SS” as it is known in the judicial system. Unfortunately, the Romanian Constitutional Court aided and abated the partisan onslaught on the judiciary by invalidating a number of key provisions of the anti-corruption framework and by giving the Justice Minister discretionary power over the prosecutors’ activities. The legislative changes implemented at Mr. Dragnea’s behest have been designed with the clear intent to make difficult, if not impossible, the indictment and sentencing of politicians for corruption.

In parallel with the legislative assault, a sustained media campaign against Mrs. Kovesi was launched in order to tarnish her reputation. Those who commissioned this campaign went as far as to employ an Israeli private security company to gather compromising information against Mrs. Kovesi and harass her closest relatives. Only the decisive intervention of the Romanian Intelligence Service (SRI) put an end to this activity. The campaign against Mrs. Kovesi, long considered by Liviu Dragnea his arch-Nemesis, culminated in her firing from the position of chief prosecutor of DNA in 2018 on trumped-up charges (and a suspicious indictment for abuse of office from the new department tasked to investigate crimes in the judiciary).

However, Mr. Dragnea’s plans never came to fruition. Despite manipulating the legislative process from his position as Speaker of the Chamber of Deputies, he couldn’t convince his proxies to grant him amnesty and pardon. Even the weakest of his proxy prime-ministers, Mrs. Viorica Dăncilă, refused to sign an emergency decree that would have granted him pardon and amnesty for his crimes. This refusal led to the “firing” of two consecutive PSD prime-ministers, Sorin Grindeanu and Mihai Tudose, and an incredible ministerial turn-over of almost 80 ministers in two and a half years. The excessive ministerial turn-over, coupled with Mr. Dragnea’s tendency to centralize decision making and kick out his critics from the party, exhausted the human resources of the party and placed incompetent individuals in key positions who owed their positions to the party leader.

The main reason why the three consecutive prime-ministers refused to acquiesce to Mr. Dragnea’s wishes was the severe warning received from the European Commission that adopting any clemency measures through an emergency ordinance which would have freed and amnestied those convicted of corruption offences, would eventually lead to Romania’s suspension from the European Council. This and Romania’s presidency of the EU council in the first half of 2019 deterred three prime-ministers from granting a pardon to Liviu Dragnea. Mrs. Dăncilă, the final proxy-PM installed by Liviu Dragnea, explicitly refused to comply with his demands for fear it would compromise Romania’s presidency of the European Council.

The Romanian civil society is the other reason why Liviu Dragnea’s plans never came to fruition and the PSD-led coalitions suffered at the polls. Since early 2017 there has been a continuous opposition to legislative changes that would have weakened the judiciary and would have affected the anti-corruption drive. Continuous protests delegitimized the government’s actions and sent important signals to Brussels that the actions of PSD-led cabinets were not supported by the Romanian people. Protests continued despite vicious media campaigns against the organizers and participants as well as the brutal and unjustified intervention by the Gendarmerie on August 10, 2018.

The final nail in the coffin of the PSD-led alliance came, however, at the polls on May 26, 2019, when Romanians were called to elect their members of the European Parliament and, simultaneously, to a referendum on judicial “reforms” enacted by PSD. The Romanian social democrats were soundly defeated by the opposition national-liberals (PNL) and only narrowly avoided coming up third in the European elections. The party maintained only a 20,000 vote lead over the Alliance between USR (Save Romania Union) and PLUS (party of former PM Dacian Ciolos), which came up third at the polls, an alliance that consists of two new parties, of which one (USR) is the second main opposition party. ALDE, the main allies of PSD, did not get enough votes to reach the 5% electoral threshold. Moreover, Romanians overwhelmingly rejected the judiciary reforms enacted by PSD over the past two years.

Romanians correctly gauged that the main objective of the social democrats was not governing the country in the public interest, but trying to save themselves from the long arm of the law. Conversely, PSD underestimated the popularity of the anti-corruption drive, especially in urban areas and among professional Romanians.

The end of Liviu Dragnea’s rule over Romania and PSD came a day after the elections, on May 27, when he was finally convicted and sentenced to three and half years in jail for abuse of office. Realizing that his presidential ambitions have been quashed by his close alignment with the social democrats, Călin Popescu Tăriceanu, withdrew ALDE from the governing coalition and joined former prime-minister Victor Ponta in the opposition. Rebels from ALDE joined with the PSD in order to maintain their privileged access to government offices and resources – but to no avail.

On Thursday, October 10, what was left of the PSD-led coalition received a no confidence vote. PNL and USR managed to find enough votes to bring down Mrs. Dăncilă’s cabinet – even members of PSD voted for the fall of their own government. The latter is a testament to the unpopular policies pursued by the party while in power and the leadership style imposed by Liviu Dragnea and his cronies. As things stand now, Viorica Dăncilă (who is running for president this fall) is unlikely to reach the second round of the Romanian presidential elections. A presidential election without a social-democrat candidate in the second round would represent the final humiliation for the party.

Note: Written for the Center for Army, Conversion and Disarmament Studies” (CACDS) in Ukraine and published on https://cadcs.org.ua on October 16, 2019