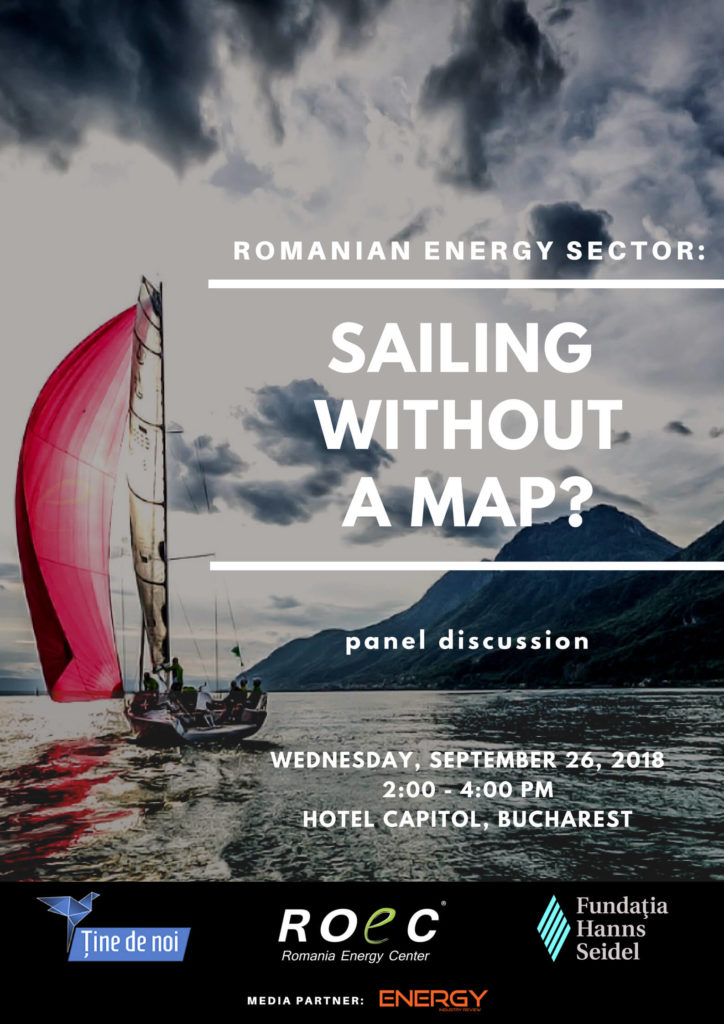 Romania Energy Center (ROEC) together with the Association “Up to us” and Hans Seidel Foundation have the pleasure to invite you to a panel discussion on the following topic “Romania energy sector: sailing without a map?”. The event will take place on Wednesday, September 26, at Hotel Capitol, in Bucharest.

CONTEXT: This year Romania holds the chairmanship of the Energy Charter Conference. Next year Romania will take over for the first time the presidency of the EU Council. Romania’s regional and European responsibilities are piling up. However, two years after Romania came up with a new energy strategy, there is still no valid document in force, only a draft. Before the ink on the 2016 text has even dried, another working group was set up in the Energy Ministry to adjust and update the forecast and document prepared under the previous leadership of the ministry (Energy Ministry Order no. 473/15.06.2017, updated by order no. 543 on 25.07.2017, and further updated by order no. 309 on 29.02.2018). This process of updating the document has been anything but transparent, especially compared to 2016.

In the meantime, the “Clean Energy for All Europeans” package proposed by the European Commission back in November 2016 stipulated that EU member states have to prepare integrated national energy and climate plans (INECPs) for 2021-2030 by January 1, 2019. According to the Governance of the Energy Union Regulation, members states had to produce the first such draft national plans by January 1, 2018. There has been no public pronouncement from the current energy minister on this subject whatsoever.

So, not only did Romania’s national effort from 2016 to set a course for the sector remained in some sort of institutional limbo (sent for approval to the Ministry of Environment in early 2017 and, at the same, under revision by a new working group within the Energy Ministry since July 2017), but it also had to be merged with Romania’s environment strategy and submitted to the European Commission for preview by January 1, 2018. We have seen little public communication on the latter aspect from the Ministry this year.

Therefore, a legitimate question arises: sailing without a map, how does that affect the energy sector?

The event aims to take the pulse:

The debate will be a good opportunity to take stalk of latest trends, expectations, perceptions, difficulties and progress, as well as perform a much needed reality-check.

Ultimately, the question we seek to answer is: how do the stakeholders of the Romanian energy sector fare between no national strategy and the practical everyday aspects of the real economy?

UPDATE: On September 20, the Energy Ministry put for public consultation the draft it has been working on until now. Our panel aims to take a critical look at this latest draft (the forth since 2014).